Bezu is a girl from a rural area inhabited by agricultural families. At 13, she escaped a planned abduction outside her school. CHADET supported a process where her marriage plans were cancelled by her parents and her education supported.

In many parts of Ethiopia it is still common for girls to be married young, well before 18 and before they can get a school education. In the Oromia region, it is traditional for a girl’s ‘abduction’ by a suitor to be arranged, often with the knowledge of her parents. This is a particularly traumatic form of engagement for a girl, and one that signals the end of childhood, family life, and education.

CHADET targets girls at risk of early marriage, making sure they can ﬁrst avoid it and then continue with their education. This can only be done with the support of a girl’s family and community, who are supported in both their livelihoods and in campaigns to increase their understanding of the value of girls’ education.

Here, Bezu explains the difficult time she went through, the support she received, and how her life is now back on track:

"When I was 13 I was ﬁnishing Grade 7. I didn’t know but a marriage had been arranged for me by my parents, to a man I didn’t know.

In this area families will arrange a marriage for their daughter, without her knowing, and then agree that the man can abduct the girl. It’s cultural. It’s because a girl would otherwise be resistant. Once you’ve been abducted you’re his.

I didn’t know about the plan and I had never seen that man. He lives in town, not an old man but not a young man either. Apparently his family had visited my parents several times to discuss it.

The day of the abduction I was in school. While I was preparing to leave there were men waiting for me outside, ready to abduct me right in front of the school. They had paid a boy at the school 10 Birr to point me out to them. The Principal of the school heard about what was happening because that boy reported it to him, and he wanted to support me. He couldn’t approach those guys because they wouldn’t have listened to him, but he found me and told me not to go out the front gate. He helped me escape out the back of the school.

I ran home and asked my parents why they had done that. They said that he was rich, from town, and could look after me, so it was better that I accepted. I said, ‘No, I don’t want this, I want to continue my education!’ I tried to negotiate with my mother but she was very much in favour of the marriage. So I went back to the Principal and through him I ended up becoming a CHADET beneﬁciary. I wanted to ﬁnish my education and not be given as a wife to a man I didn’t know.

My parents kept insisting on the marriage, but I was very resistant. I kept telling them that if they tried to marry me I would run away, I would go to another country, anywhere. That made them listen to me a bit more. And by then, CHADET were putting pressure on the issue, making people aware. My parents were part of the Community Conversations that CHADET organised. All through those I was praying that the plans for my marriage would be called oﬀ.

It took a lot of time. There were a lot of arguments in my house, day and night. My mum and my dad kept saying to me, ‘Why are you refusing? That man is rich, he’ll look after you in town’. They also said, ‘What will our relatives say about us, with you not listening but having your own your opinions, which in this place is wrong?’ It was really tense, there were so many arguments.

I have an older brother who lives in town, and he supported me. He even came to speak to my parents and tell them to cancel the marriage.

My parents started slowly changing through the Community Conversations that CHADET were organising, and also by talking to the Director of the school who was supporting me continuing at school. He told them that I should continue with my education so that I can have a future. 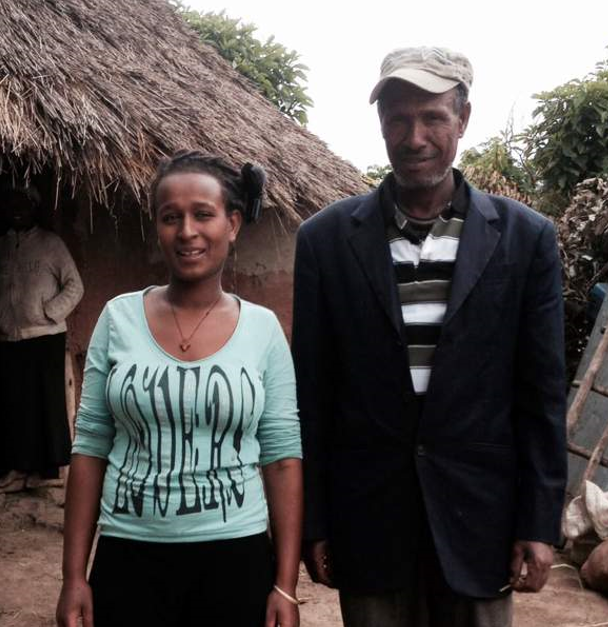 "I wanted to finish my education and not be given as a wife to a man I didn’t know."

Eventually, their thinking changed and the marriage was terminated.

At last I could focus on my schooling again. My marks had got steadily worse since I found out about the marriage. But when I knew the marriage was over, and when I began attending tutorials, I started to improve. My parents used to think that I didn’t need to study at home, and that if I was going to the school library it was to play or meet boys. They’re getting better though. Recently they started trying to motivate me with my schooling, understanding that this is my path and wanting me to do well at it. They even tell me to study now!

My parents are still part of Community Conversations and today I know that my father tells people how his daughter was rescued from early marriage. He tells them that if she hadn’t been rescued, she’d been carrying a big burden on her back, and wouldn’t have been able to complete her education. He is really supportive now.


They’re expecting me to ﬁnish my education, and get in a better position. They hope I will support them in future too.

I plan to ﬁnish my school and get a job, I’m not yet sure which. But I’m happy now, and feeling conﬁdent. If I’d been married, I would have suﬀered so much, but things are really diﬀerent now."

The reasons behind early marriage are complicated, rarely a simple case of parents being cruel. As Bezu recognised, her parents saw it as a security for her, and her father explains how this was particularly so because he did not see the value of education in terms of safeguarding Bezu’s future. Now that Bezu is not only attending properly but also receiving tutorials that drive her marks up, her father is seeing education as more relevant and important:

“I have a lot of children and a lot of them have been to school and are now still here in my home. So I thought that Bezu might as well get married and then she’d have a secure life and not have to be a burden to me. But she said no, she was really resistant. And CHADET showed us that it’s better if girls are educated. They changed our attitudes over time, and they also helped us to keep Bezu in school by providing for all the costs like books. She’s doing well now. A father wants his daughter to reach somewhere better, so that’s what I wish for her, and I hope God will help me. I had seen that education doesn’t always make children successful, look at all the children I have still living with me. But Bezu is doing well. And there are a lot of people around here who’ve been educated and reached a better place. The director of the school is one, and certain administrators. These people can be role models.”

Bezu is one face of the change occurring here when it comes to marriage and education of children. Her father, who used to be a famously stubborn element in Community Conversations, is now one of the strongest advocates of messages that support the choices and rights of children:

“In the old days it didn’t matter what a child thought, it was just about the opinion of the parents. But that was very traditional, and it’s not really good for children. Now things have changed, and it’s better. Children shouldn’t be forced to do things they don’t want to do. We’ll be better if we believe that.”

Something has changed in Bezu, she has a determination clearly shaped by having been very angry, and by the many furious arguments that went on in the house. Her mother remembers how she resisted their rural way of life, refusing to wear traditional clothes or eat in the traditional way. Perhaps understandably she has a problem with men, and shocks her mother with this:

“Bezu has vowed to kick any man who comes to ask for her in marriage! And she says that if she doesn’t do well at school and go to university, she’d prefer to join the police and live like a man rather than get married.”

Looking at her striding across the compound in a very ‘town’ outﬁt, her mother exclaims, “She’s like a man! She likes wearing trousers, she likes living like a man!”

But underneath her alarm at a teenage daughter’s deﬁance, Bezu’s mother is proud too. Because an important aspect of the new Bezu is a young woman’s dedication to education, and her marks are improving. This is especially important to a mother who has long carried regret at missing out on education herself:

“I want Bezu to ﬁnish her education, train in something, and get a job. I only attended school until grade 2 before I was married and become the mother of 8 children. I don’t want Bezu to end up like me. She should make a success of herself, and then get married and have two children, not more than that. An educated person can reach anywhere. As long as she helps me and the country, she can be whatever she wants.”

Getting Bezu to this point required a patient process of discussion, persuasion, material help for her to attend school, and academic help for her to perform well there. CHADET also supports her mother through a savings group, and after a year of regular saving she owns three sheep which are going to be used to pay school costs for the family’s children. This, and the whole package of support, have given new strength to a mother who is ready to do things differently:

“Bezu’s changing a lot, and so am I. CHADET trained me in savings and helped me buy three sheep. Bezu keeps feeding them and saying, ‘I should feed these sheep because when I reach Grades 11 and 12, they’re going to be the ones supporting me!’ But CHADET also trained me in parenting. I’m old now, but if I was young again I’d want another daughter, because I’d raise her differently.”

Women and girls all around the world face inequality but extreme poverty puts women at an even greater disadvantage.

Globally, one in three women are beaten and/or sexually abused in their lifetime, over 700 million women alive today were married before their 18th birthday, 130 million girls between the age of six and 17 are out of school and 71% of the estimated 40.3 million people in modern slavery are girls and women.

Our programmes are directly addressing the needs of girls and women in situations like these. From income generation programmes for teenage mothers, rehabilitation for sexually exploited children and women and education for girls working on rubbish dumps, our work provides hope and opportunity.

£10 can provide a girl in Ethiopia a games kit for school.

£25 can support a child in Kenya into primary school with a uniform, shoes and exercise books.

£50 can provide 20 children in India with textbooks, notebooks and pens.

£100 can provide a weeks lunch for a class of 35 children rescued from Bangladeshi dump sites.

£500 can provide nine children in Kenya with education and life skills support to enable them to return to school.